We’ve just discovered Pinterest and as ‘visual’ people we’re really excited about it! So we thought we’d create a Halloween Party Ideas board since that spooky time of year is just around the corner.

In the meantime here’s how we got on last year – maybe it will help you with your plans for this year’s party!

Without doubt the Halloween ghost hunt is a must! Last year we got 5 mums to join in, each hid a treasure marker at their house and we set the ghost hunters off to the first house. When they found the next clue they also did a party game too. Eventually everyone ended up at Jill’s house for some Maggott stew (beef stew with rice between you and me) a fabulous warming end to a chilly night!

Here’s some of the things we got up to:

Pin the Skull on the Skeleton

At the first house we fixed our pin the skull on the skeleton game to a child’s easel and got all the kids to have a turn sticking the skull on. We just used some blu-tac to make it easier (and safer than using a pin). Making sure there was no peeking through the blindfold of course. 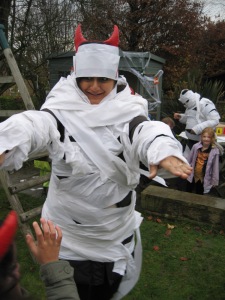 This was hilarious, we gave each family a toilet roll (a cheap one!) and challenged them to wrap someone in toilet roll until they look like an Egyptian Mummy.

Next, we used our printed Halloween stepping stones game (which is basically an updated/themed version of musical chairs). Then we put on some spooky music (Ghost Town by the Specials, the Addams Family theme – anything like that works well). When the music stopped the kids had to stand on a stone and whoever wasn’t on a stone was out, until there was a winner. 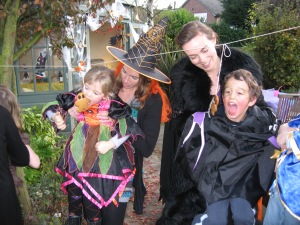 We suspended some gingerbread men from a tree branch with string and with their hands behind their backs, everyone had to try and eat their biscuit off the string before their components.

This game is easy to make and lots of fun, Just get a large box and cut out some hand holes. Place 6 bowls inside the box and fill with body parts – or stuff that feels like body parts!! We used:

Maybe you can make up a few more – and then tell us feedback@lelloandmonkey.co.uk

How to create a treasure hunt game to entertain kids during the summer holidays
Jul 27, 2022

What to do instead of trick or treating at Halloween
Jul 27, 2022